In our project we are designing an Wireless remote control based on Radio Frequency (RF 434 Mhz). For that we are using a RF transmitter receiver module. RF module is used as the remote transmitter & receiver, two IC’s HT12E & HT12D is used for Encoding and Decoding.

Circuit diagram and explanation given below will make you confident enough to make a remote control car.

There are two blocks, the Transmitter (wireless remote control) and the Receiver (robot car).

On the transmitter remote side, we have the switches to give the digital inputs to the HT12E encoder IC. The encoder then encodes this data and sends it to the the RF Transmitter module.

On the receiver side, we have the RF Receiver module which receives the encoded data and passes it on to the decoder. The decoder decodes the data and sends it to the L293D motor driver IC to drive the motors.

We have used 2 x DPDT switches to move the car backward, forward, left and right. Along with the switches we have used LED’s to indicate what data is being transmitted from the remote.

HT12E Encoder IC: It is a 212 series encoder IC used for wireless communication applications. It is mainly used to convert 12 bit parallel data (8 address bits and 4 data bits) to serial out so that it can be transmitted using a transmitter Module.

RF Tx Module: 434 MHz ASK transmitter module for transmission. It is capable of providing a data rate of about 8 kbps. It is one of the cheapest wireless modules available in the market.

HT12D Decoder IC: It is a 1212 series decoder IC used for wireless communication applications. It converts the serial input to parallel out.

Motors: You can use 2 x BO Motors or 4 x DC Geared Motors, which are driven by the motor driver L293D and both of them are connected to robotic wheels to move the car.

Battery: Receiver section need more power than the remote control circuit. So 9V/12V battery is required to power the circuit.

Buy assembled RF circuit with all the components here.

In case of any questions or queries, feel free to post below. 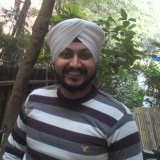